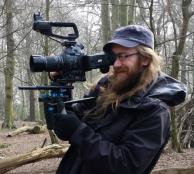 Christopher has made films for over 10 years, first as a student and later as a media professional. He has been involved with over 100 short films.

Christopher has shot, produced and directed television and online video for a number of organisations, including five years’ experience working for the BBC, including BBC Scotland, BBC Two and BBC Four. His work has been nominated twice for BAFTAs. Other organisations he has worked with include the NHS, Citizens' Advice Bureau, The University of Edinburgh and the Badminton World Federation.

As well as producer, Christopher will be Crooked Frames director of photography. In this role Christopher will bring a bold style of shooting with an emphasis on strong composition, subtle lighting and character-driven shot choice.